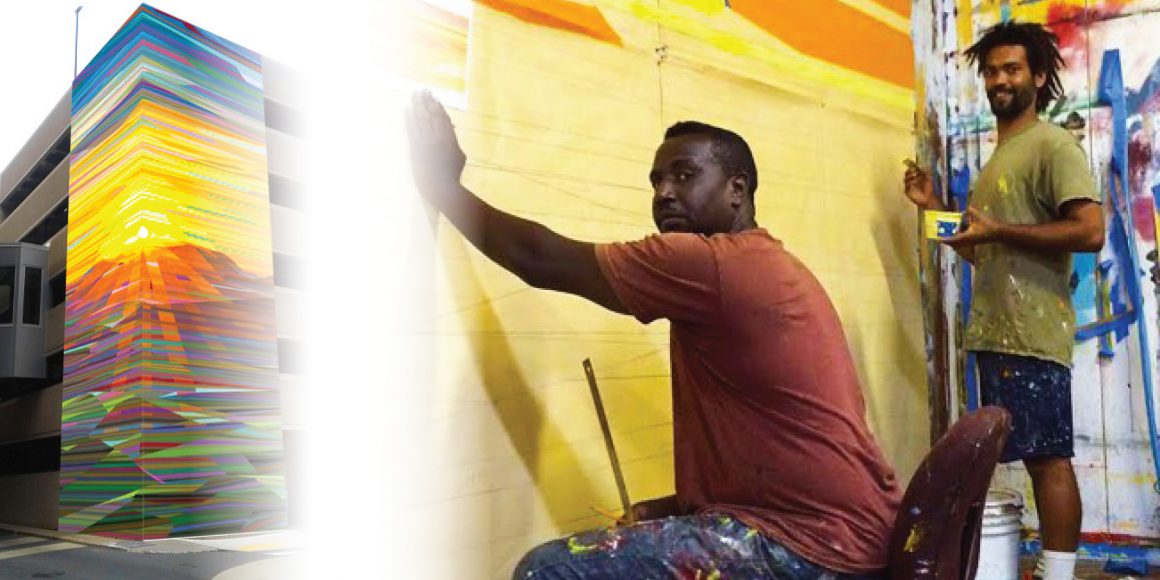 New Mural Being Installed on The Downtown Allentown ArtsWalk 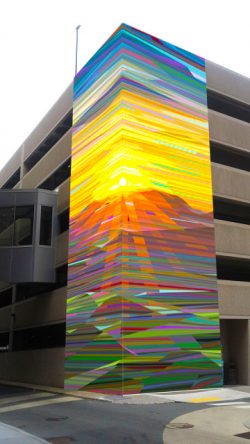 Artists have begun installing a colorful new mural on the public parking deck along the ArtsWalk at City Center. The mural design—a stylized sunrise that will span the south- and west-facing corners of the parking deck at Church Street—was chosen from proposals submitted this summer, with Amber Art and Design of Philadelphia having their proposal selected. The project was approved by the city’s Public Art Committee and is being made possible with the support of City Center Lehigh Valley, which provided $40,000 for the mural’s creation.

The ArtsWalk Mural Project was initiated to make art more accessible to the general public and to enhance Downtown Allentown for residents and visitors. Arts programming will continue to occur in the pocket park across from the mural and on the ArtsWalk itself.

“Many of the mural designs submitted were fascinating, well conceived, and beautiful,” says David Mickenberg, president and CEO of the Allentown Art Museum and chairman of the Public Art Committee. The one proposed by Keir Johnston and Willis Humphrey, two of the artists of Amber Art and Design, a collective of five artists, was the most stunning, says Mickenberg, and it offered the most visual impact on the ArtsWalk. The committee believes it will be one of the strongest presentations of public art in Downtown Allentown and will be the beginning of some great public-private partnerships in the commissioning of art in the community.

“The Public Art Committee is especially grateful to City Center for their support for art in the public environment, to the Parking Authority for their permission to use the garage corner façade for the mural, and to the City for their continuous encouragement,” says Mickenberg. The Public Art Committee also includes sculptor Dan Kainz, Muhlenberg College associate professor of art Margo Hobbs, independent curator Deborah Rabinsky, Allentown-based painter Rigo Peralta, and Peter Lewnes, main street manager for Community Action Development Corporation of Allentown. 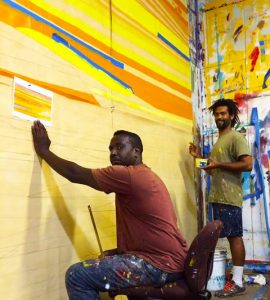 Allentown’s pedestrian-only ArtsWalk begins across from the PPL Center on Seventh Street, near the recently opened Queen City BBQ, and runs east past STRATA Flats apartments to Sixth Street, then alongside Miller Symphony Hall and through the Arts Park and comes to an end at in front of the Allentown Art Museum on Fifth Street.

“City Center recognizes the important role that accessible art plays in creating a vibrant urban community,” says City Center Vice President, Director of Project Design & Corporate Branding Jane Heft. “We’re thrilled to have a new mural on the ArtsWalk for residents and visitors to enjoy along with City Center’s six gallery and studio spaces for local artists, including Creativity Lab in collaboration with the Allentown Art Museum, MEZZ Gallery, Gallery 724, Roey’s Paintbox, Gallery on the Walk, and Ann Schlegel’s studio.”

Installation is expected to be completed the week of November 14-18, with the top 30 feet completed by November 7.